Cycling Prosthesis With A Kick

The Fusion Peak Cycling Prosthesis is one of a kind and can be customised in many ways to help you achieve your best on your bike. The features are designed for versatility. The system is unique in the way energy is recovered by the shock and helps to raise the leg through the back stroke and over top dead center. The cleat placement is designed to be setup just like any other foot on any other leg. Once the cyclist has a matching cleat position from one side of the bike to the other; pelvic symmetry can be achieved.

The main shaft can be extended to adjust for leg length.

The ankle pivot can be set to change the toe down, heel down orientation and can match the opposite side for symmetry.

The shock pressure can be adjusted to suit the size and power of the rider.

The shock compression can be used to stiffen the pressure on the down stoke. For sprinting this can be set hard and for long cruises through the countryside this can be set to a softer feel.

The main shaft can be rotated to match the heel in, heel out orientation of the other foot. This movement can also help the knee tracking on the prosthesis side.

Any cleat can be attached to the foot plate of the prosthesis and fore/aft as well as lateral (side to side) motion can be adjusted.

The shock rebound can be adjusted to suit the riders stroke and natural cadence. 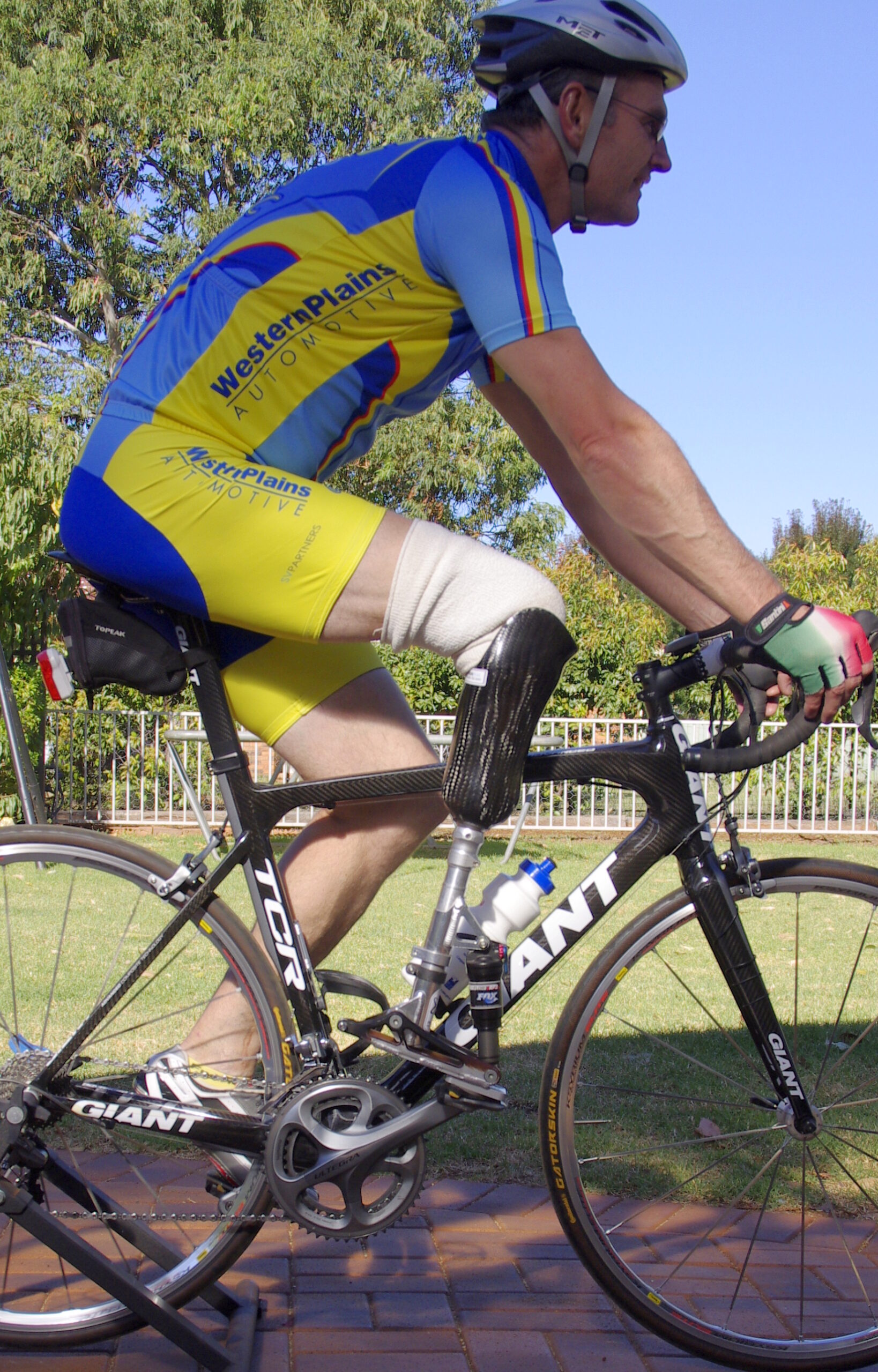 In October 2010 Sydney based bike fitter Aaron Dunford embarked on a trip to help fit cyclists in Dubbo to their bikes. One unusual task was the fitting of a cyclist named Gerard Cushan. Gerard has a transtibial amputation of the right leg; meaning he has a small amount of tibia intact below his knee and nothing beyond that. An email prior to the fitting read,

Just to let you know in advance of my bike fit on Monday afternoon that I am a right below knee amputee. I ride with a specific cycling prosthesis. I donʼt know if you have had any experience in working with lower limb amputees, but Iʼm looking forward to the fitting and hopefully can maximize efficiency on both road and TT bike.

Gerard is a competitive cyclist who enjoys road racing and riding in individual time trails. When Aaron received this email he felt nervous. He had not had any experience with fitting an individual with using prosthesis before. Gerardʼs cycling prosthesis was simply a carbon fibre post with a cleat attached to a small plate at the bottom. The post attaches to his leg with the carbon fibre cup. There was a small amount of adjustability using the coupling between the cup and the shaft.

During the fitting Aaron struggled with the obvious, Gerardʼs left leg works well, it pedals smoothly and doesnʼt cause him any issues. The right leg, and the prosthesis however cause a lot of instability in his position. “He was enlisting a lot of muscles just to hold this position still.” Aaron noted. “His other issues included a large degree of anterior pelvis rotation on the right hand side and an inability to stand and sprint. All caused by what I thought was cleat placement.” The cleat on the old post was under where his ankle would have been, just forward of the heel. Imagine being clipped in to your pedal on the left just like normal, and on the right no imagine you are clipped in but under the rear portion of your arch, you can try this standing, step forward so your right foot is about half way up the length of you left foot. Now looks down at your hips. “At this point I felt there were two roads, one, we drill holes and move the other back so they are even or two, we start from scratch.

Aaron finished up the fitting with all Gerardʼs measurements and a promise to come back one day with something that would give him an advantage. The key was in the details of how a bike fitter sees the world, in symmetry… In sync… Flowing from man to machine and into the earth the bike fitter sees the whole picture and knows instinctively what needs to be done. Aaron thought, “I should build a foot, that way we could align the pelvis and create some stability”.

And that is exactly what he did, with nothing more than a hand full of notes and measurements from the fit he set out to build one fast foot.

The foot began as a drawing. Then one day Aaron came across an old broken mountain bike frame; an old Turner Flux was to provide the curtail
components that would eventually be the new prosthesis.
The prosthesis was to see many shapes but all along the ankle was a key factor, having ankle would provide the motion needed for symmetry in Gerardʼs pedal stroke. From the cleat up the body was to be re-aligned.

A Fox RP3 shock was chosen to control the anklesʼ movement through itsʼ range of motion. Aaron remembers, “after I put the shock in I walked into the kitchen to show my mother in-law, she thought I was clever and gave me some chocolate”.

Here is a photo of the prosthesis with the shock installed.

The next step was to attach the prosthesis to Gerardʼs cup and pedal.

The latest prototype went to the experts at Coastal Engineering and a
shaft to fit into Gerardʼs coupler was milled as well a cleat plate was
welded onto the bottom of the foot. The final modification was the
installation of two bicycle seat post clamps to clamp the two outer shafts to the inner sleave.

In February 2012 Aaron returned to Dubbo to see Gerard and fit his new prosthesis. “I really had no idea if it was going to work,” Aaron recalls, “I was very optimistic, but ready to go back to the machine shop.” The connection between Gerardʼs coupler and the top shaft of the prosthetic had to be perfect or else there would be great chance that the prosthetic would slip or twist. The shaft fit perfectly.

When fitting the cleat to the bottom of the prosthetic the human foot was mimicked and the cleat was placed in symmetry. One unique advantage of this design is it can be adjusted in 5 dimensions. It can be rotated 360 degrees, it can be raised and lower to adjust for the length of the other leg, the angle of the foot can be opened and closed to match the planar flexion of the human foot and the shock can be dialled in both with air pressure for compression and hydraulically for rebound. All these adjustments mean the prosthetic could be fitted to any transtibial amputee with a suitable coupling and a love for bikes.

Here is a recent email from Gerard to Aaron.

Sorry for the delay in communication. I did say I would give you some feedback in a couple of weeks, hmmm…

Anyway, I thought I’d start with the feedback that I was going to give you, and then I’ll set about answering your questions. The main improvements that I perceive are;

The main downside of the new set-up is the mass, however, longer term we could look at reducing this. Having said that, I don’t really notice the mass while on the bike. The other issue, which is not really that big, has been trying different pressures in the shock. I borrowed a pump from a mate, but the scale does not really kick in until about 20-25 psi is present, therefore, it has been more of a ‘feel’ thing.”

When did you start competitive cycling? Just over two years.

What level are you racing at now? B/C grade in Dubbo.

What events do you have planned for the next year?

In two weeks I will be competing at the National Paracycling Championships. Another goal this year is to compete at the Pan Pacific Masters Games in November in both cycling and swimming. I will also do some open road races during the winter season, I’ve identified some that I’d like to do, but I need to work around my children’s sport.

What do you feel were the drawbacks with your old prosthesis?

The difficulty was trying to get the cleat far enough forward. It made out of the saddle efforts, more particularly on climbs, challenging.

What was good about the old prosthesis? Low mass.

Do you feel I met your cycling needs with your new prosthesis?

Yes, I was particularly impressed by the ease of adjustment for both length of limb and heel height. The fact that it is compatible with the socket is a real bonus.

What advantages do you feel the new prosthesis has over the old one?

Apart from getting the cleat further forward, the articulation of the foot has culminated in a much more ‘natural’ pedaling action. It has made out of the saddle efforts easier for me to achieve.

How has the new bike position affected the way you feel when you are riding?

As, yet I haven’t raced the road bike much, but I have found I can comfortably stay in the drops for much longer periods of time. On the TT bike, my hip angle is more open and I feel more comfortable in the TT position.

How has the new bike position affected the way you feel when you are not riding?

Would you change any aspect of the design?

Not so much the design, but to reduce the weight would be a real bonus.

If you could put a price on your prosthesis, how much would it be?

Priceless! No, seriously, if the attachment proves reliable (and there’s no evidence to suggest it won’t be) I imagine that in its current form, it has be worth at least $1000. It would be great to reduce the weight, but obviously more exotic materials cost more, as well as the fact that small numbers are not cost effective. Although, if the set-up proves itself over the longer term, I would be willing to pay more to reduce the mass.

Are you still smiling? That would be a YES! 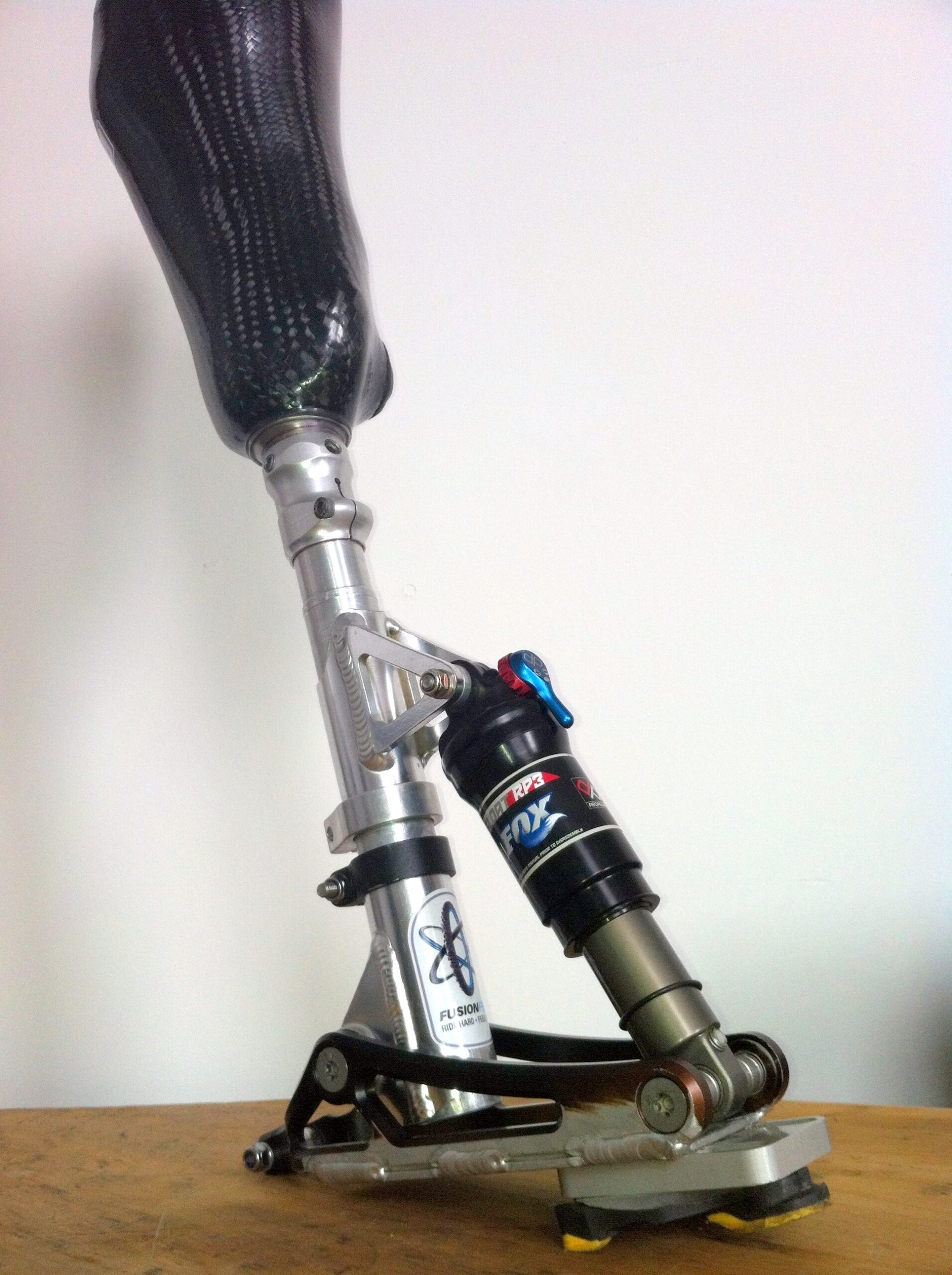 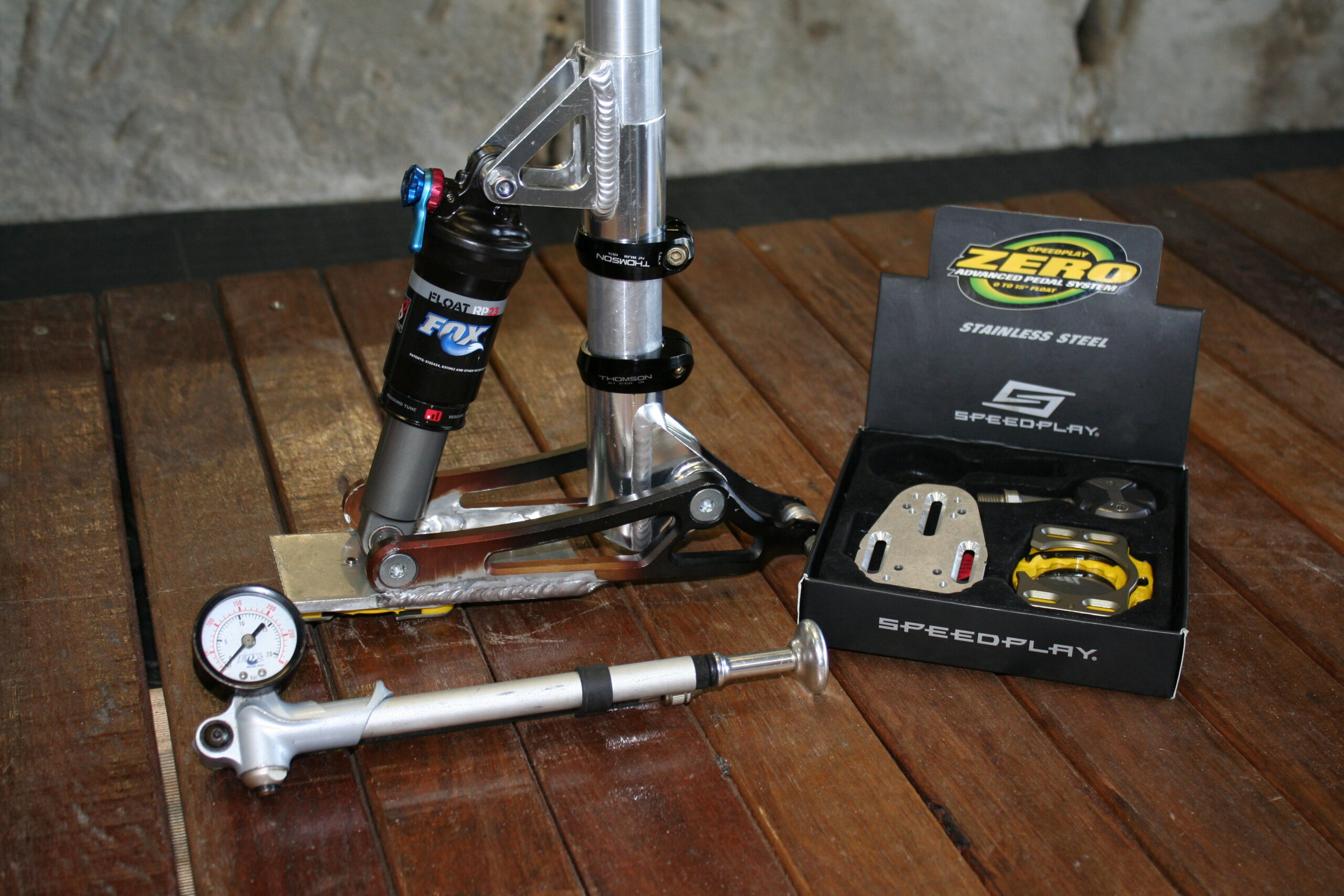